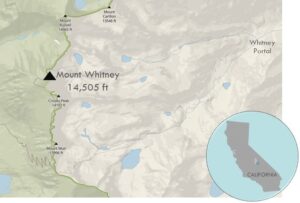 The Sierra Nevada Mountains form part of a backbone stretching from Alaska to Antarctica along the Pacific Ring of Fire. The High Sierra has always been an alluring mix of danger and enchantment. Tribulation and misadventure have long barred admittance to its dramatic snowy peaks, gleaming lakes, raging waterfalls, wildflower meadows, and otherworldly alpenglow. The lure of Mt. Whitney (highest peak in the contiguous United States and a fourteener) as a rite of passage is primal and an affirmation of one’s vital spark. Regardless of the inspiration, most ascend Whitney in a day.

From the sleepy town of Lone Pine, the trail begins due west, past the boulder-strewn Alabama Hills, at Whitney Portal. The path quickly leaves behind trees, streams, and lakes for the granite massif. From Trail Camp, your preparation will be tested via the unrelenting 99 Switchbacks until you reach Trail Crest. Another arduous push is required just below the needles and pinnacles of the sharp ridge until the ultimate scramble up a colossal talus heap. 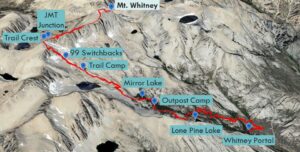 An alpine start with headlamps will be required from Whitney Portal. From the trailhead just below the Whitney Portal Store, there are a number of large interpretive signs and two sets of bear boxes. The path is surrounded by pine forests and streams. The Mount Whitney Trail ascends a number of fairly long switchbacks reaching the North Fork of Lone Pine Creek 0.65 miles from the trailhead. At the junction, stay on the Mount Whitney Trail as the northern path follows the technical Mt. Whitney’s Mountaineer’s Route.

There are several stream crossings. After the bridge made of logs over Lone Pine Creek, you will find a sign pointing to Lone Pine Lake down a short trail to the left. Soon, you will reach a sign indicating your arrival at the Mt. Whitney Zone, will you will not be allowed to continue without the appropriate permit.

When the trail dips a bit before Bighorn Park, remember to look back at the trees below. The trail traverses the southern edge of a luxuriant green meadow. Outpost Camp is sandwiched by high granite walls and was once popular with multi-day hikers. There is a waterfall at the edge of Outpost Camp.

The trail begins ascending some switchbacks on some exposed granite blocks. After passing Mirror Lake, you traverse a gargantuan, stadium-sized rock bench. Tree line is just above Mirror Lake, and the green landscape starts to fall away to gray.

The trail scrambles up some granite boulders and a stretch of rugged terrain. The trail continues along the northern side of Trailside Meadow’s of native grass and wildflowers and Lone Pine Creek.

Consultation Lake is a large glacial lake south of the trail. If you are lucky enough to be here around sunrise, you will be treated to a luminous, scarlet alpenglow on Whitney’s ridgeline. 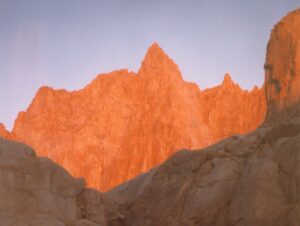 Trail Camp is a flat clearing that overnight hikers use to stage their summit attempts. Be careful as the marmots will snatch any unattended gear within minutes.

Wotans Throne sits regally above the Trail Camp pond. Avoid bonking by fueling up at Trail Camp. From here, the trail begins its climb of the dreaded 99 Switchbacks. If you experience symptoms of altitude sickness, you may need to seek treatment. Near the top of the zigzags, there may still be lingering snow and icy patches late in the summer. This section has cables to protect hikers from the steep exposure.

The ridge gets closer and closer until eventually the brunt of the climb is complete. Trail Crest has magnificent views of the glacial lakes and scenery below to the east and in Sequoia National Park to the west.

The ridgeline trail hugs the western face of the Whitney massif with spectacular vistas of Sequoia NP’s eastern boundaries and its gemstone-colored, teardrop glacial lakes and jagged granite peaks. The moonscape of the glacier-carved valley below is both majestic and desolate.

If you have extra energy, you could always take a Class 3 detour to the top of Mt. Muir, another fourteener, about half a mile from the junction.

The way is still far and steep with alternating series of needles and gaps. These windows have sheer drops on each side and gentle gusts of wind flowing through them.

The route is a talus slope of loose rock slabs that requires boulder hopping to the peak. Atop the summit plateau is a stone shelter, a plaque, and views for miles.

Take the 395 to Lone Pine and then head west on Whitney Portal Road. In 14 miles, you will reach Whitney Portal. As this is an active bear area, do not leave food or scented items in your vehicle.

For day use and overnight hikes within the Mt. Whitney Zone, apply to the 2020 Mt. Whitney Lottery between February 1st and March 15th on the website: www.recreation.gov. If you win the lottery, you must pay the $15 per person reservation fee in April to claim your awarded date.