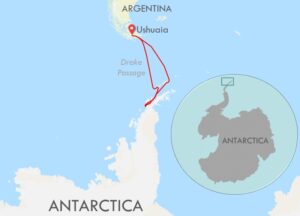 Ahoy, matey! For a modern Captain Nemo intent on unraveling nautical mysteries, setting sail on the high seas, and Antarctic kayaking may be the life for you. From Tierra del Fuego’s southernmost city of the world, Ushuaia is the jumping off point for the expedition ship, which is escorted by a pilot boat required to navigate through the narrow Beagle Channel to the ocean. Be brave, and endure for a couple days, as the vessel is hammered by the blustering winds and tempestuous seventeen-foot waves of the Drake Passage. During the night, the porthole in our cabin is bolted shut, as we watch the water submerge our window. The cold waters of the Southern Ocean meet the warm northern waters at the Antarctic Convergence, and the climate is noticeably more frigid.

Land ho! Land is spotted along the South Shetland Islands. To reach the ends of the earth, sturdy inflatable Zodiac boats ferry us from the ship to the coasts of the scattered Antarctic islands, where we emerge at the primeval polar continent and unlock its mysteries, one frosty layer at a time. We are greeted by penguin colonies, lounging seals, and the remnants of whaling ships and explorers from bygone eras.

Sea kayaking is the ultimate way to reveal Antarctica’s treasures. At water level, the craft is inviting to colossal whales and curious seals alike. The pace ensures that you see each facet of the kaleidoscopic terrain and crystal contours, and hear each piece of ice beneath. 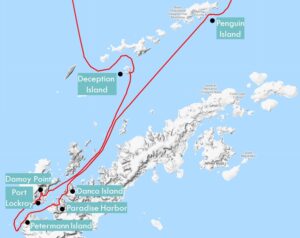 From the north of Penguin Island, the team circumnavigates the perimeter of the isle in a clockwise manner. The five kayaks pass a mega-iceberg and marvel at its deep blue bands. The low-slung perch of the kayak offers a unique perspective of the giant elephant seals resting on the rocky promontories. Off in the distance, a forceful gushing sound is detected. The colossal exhalations become louder and more distinct. Then, within 20 feet from our bow, an endangered Southern Right Whale approaches the group and shoots a V-shaped spray from its blowhole.

Penguin Island is our first chance to set foot on the continent of Antarctica. On shore, you notice giant whale skeletons left by whalers long ago. There are large colonies of chinstap and gentoo penguins. Many of them are marching up the penguin highway. You don’t expect that there would be so many colors (reds, greens, grays, blues), textures (rocks, water, mountains), and smells (mainly penguin guano). It’s much more than the vanilla visions of flat white expanses. At the top is the large red cinder cone of Deacon Peak that takes half an hour to walk up.

We paddle past the gray stone coast of Argentina’s Base Almirante Brown, now inhabited by Gentoo penguins, Antarctic shags, and Antarctic fur seals. Before Skontorp Cove is a moraine spit deposited by a glacier. We turn directly toward the rocky beach and land our kayak. And then, drum roll please, we set foot on the mainland of Antarctica! We take scores of photos brandishing our paddles and jumping on the rocks.

Coordinates: 65.11.7’S, 064.08.23’W
Distance: 4.44 miles
From Port Circumcision, we attempt a circumnavigation around Petermann Island and head to the southern tip. The sea this morning is dark and choppy and full of brash ice, which makes a loud scraping sound as it pushes past the sides of the boat and the rudder. Choppy waves roll at us from all directions. As we face an incoming swell, the bow of the kayak turns up toward the sky and we even catch some air, followed by the hollow thud of the hull. The surreal forms and silhouettes of the ice sculptures wobble and shake on the undulating water. A megalithic seesawing iceberg is dunked violently and repeatedly. By the craggy coast, we trace a hummingbird path around a frosty menagerie of tabular icebergs, bergy bits, and growler ice. My mind drifts to visions of sugarplums, molars, frozen waves, and giant bluish-white Cheetos dancing in my head.

We paddle into Port Lockroy’s bay and round the rocky corners by the shallow water near Jougla Point and Goudier Island. Then, we head south into Peltier Channel and float at the base of Mt. Luigi and the Fief Range. The tranquil water in Peltier Channel is magnificently calm and gentle. Port Lockroy is also home to the Penguin Post Office, where you can send a postcard home from Antarctica.

Antarctic kayaking is demanding. You wake up early, wolf down meals, lug around more kit (dry suit, boots, kayak skirt, and PFD) than the standard expedition gear, transport the kayaks out of the mudroom and over the Zodiacs, paddle for hours and deal with cold water and blisters. Yet these are the very qualities that make kayaking such a magical adventure in Antarctica!

We follow the penguin colony spread across the bands of rock and snow banks along the coastline of Damoy Point. The red and green ground is not penguin guano; it is Christmas colored algae.

After turning to Dorian Bay, we spot a leopard seal with a freshly caught penguin. The penguin is still alive and flopping around. But the seal viciously slams against the water and tosses its prey in the air. At some point, the guts spill out. This late in the season, the seals have already fattened up and are at maximum body mass. They aren’t really hungry, which is why they are merely playing with their food.

Starting from Whaler’s Bay, we paddle through calm and glassy water below the shelter of the inner wall. As we are in the middle of a large volcanic caldera, the area smells like sulphur. We shoot a bit of white water under an arch named the Needle by Deception Island’s hidden entrance, Neptune’s Bellows. Then, we hug the coast along the high jagged outer wall of the atoll until Neptune’s Window and turn around. On the way back to Whaler’s Bay, a couple seals play with us while following and plunging during our last round of Antarctic kayaking.

We line up for some pictures then we dash across the black volcanic rock beach. The toes feel the chill first, a few more steps, and then I dive headfirst into the frigid Antarctic water. It’s icy cold, not the coldest water I’ve ever jumped in, but cold enough that I want to leave immediately. After the polar plunge, we are handed towels and we congregate to bask in our collective glory. Back in the mudroom, we are handed shots of aquavit.