Breaking news. Gridlock on the 5. Carmegeddon on the 405. Two-lane shutdown on the 10. Raise your hands if you are ready for an alternative method of transportation. Helicopter, anyone? 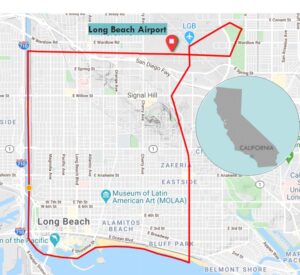 There are many places that offer flight training and introductory flights. This typically includes a classroom element about helicopter controls. You learn useful tidbits like the Jesus nut. It is the only thing holding the rotors to the helicopter, and if this thing fails, the only thing you can do is pray to Jesus. If that does not faze you, then you are going to have fun. Plus, the instructor does all the hairy stuff like taking off and landing.

The instructor starts the engine and the rotors roar to life. The instructor checks the instrument panel by flipping switches on and off. You put on a headset so that you can hear instructions during the flight. The instructor pulls up on the collective and the helicopter hovers above the helipad. After a couple swift exchanges with the air tower, we are cleared to go. The chopper zips up smoothly in the air like a dart. This is the most exhilarating part of the flight. The sensation of being in such a light and speedy aircraft combined with the knowledge that there is nothing but air surrounding you is incredible. In order to demonstrate the maneuverability of the chopper, the instructor performs a couple swift, banking turns to the left and the right, and the helicopter swings like a pendulum at about 45 degrees in each direction. 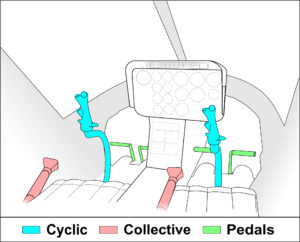 At some point, the instructor lets go. You grab the collective to maintain the current altitude. Your heels are still firmly planted on the floor with the toes on the foot pedals, poised to turn the direction of the nose, if necessary. Your right hand clutches the cyclic, which is pretty much a handlebar-shaped joystick. The flight instructor has a firm grip on the other end of the cyclic, just in case. At the Los Angeles River, you are given the go ahead to turn the helicopter toward the ocean. So far so good, steering the whirlybird while in forward flight is straightforward.

Hovering is the most difficult part of flying a helicopter. When the helicopter is not moving forward, the controls become extremely sensitive and any pilot input causes significant movement to the aircraft. Since moving the cyclic rocks the cockpit back and forth, there is also a slight lag between the time you adjust the cyclic and the movement of the cyclic. Every adjustment to the cyclic forces the pilot to chase the preceding movement in a series of constant corrections. You also have to contend with the air being pushed down by the rotors with a cushion of air beneath the helicopter, which feels like two magnets repelling each other.

Although it feels like the helicopter is not staying in one place, the instructor says that the chopper is holding in a relatively small area. Most novice pilots need to use an entire football field sized area when learning to hover. In general, it takes about ten hours to really figure out how to hover correctly. After the hovering practice, the instructor swings the helicopter around and effortlessly lands the chopper.

With a half hour under your belt, it is just 39.5 hours before you can get a helicopter’s license and escape the clogged roads below.