Tulous are earthen houses built during the 15th and 20th centuries in the mountainous regions of Fujian Province of China. These distinctive circular rings rise above the vegetable, tea, and tobacco fields and rice terraces of the Hakka people. The donut-shaped structures are constructed with fortified mud walls capped with roof tiles that open into a large central courtyard. A tulou is a model of cooperation and environmental sustainability between its residents and the idyllic countryside. 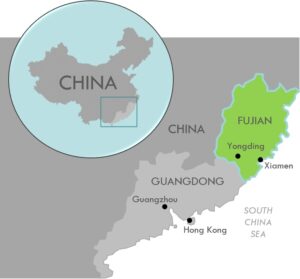 The Hakkas (guest families) are Han Chinese who migrated in waves from the Yellow River area, the last of which was during the Song Dynasty. Their language is close to ancient Chinese. This was during a time when movement within a country was unheard of. Conflict was inevitable in the south of China between these new neighbors and long-term residents. Hakkas fortified their roundhouses with 6-foot walls reaching 70 feet to protect their clans (up to 800 people) against bandits and marauders. There is only one entrance and high windows (formerly for rifles). The first floor has water wells, the second is used for food storage, and higher levels contain living spaces with several rooms for each family of the clan. In 2008, UNESCO designated 46 Fujian tolous as a World Heritage Site.

Here are eight Fujian tulou sites you should visit, located in and around Yongding County.

My great-grandfather, Su Zhen Tai, commissioned Zhen Fu Lou in 1913 to house members of the Su clan in Hukeng village. It was known as the “princess of the tulou.” In addition to his tobacco business, Su Zhen Tai was a prominent landlord, who married four times and collected 60% of the harvest from tenant farmers using a scale. Zhen Fu Lou is auspiciously positioned with a river in front and a mountain at the back, which according to feng shui principles provides harmony between the home and its surrounding natural environment.

Hakka women are strong. In this terrain, everyone worked in the fields. My grandmother climbed the mountain behind the house to gather stalks as fuel and fiddlehead ferns for food. My uncles remember playing in the river, hopping across the boulders, and trying to catch fish.

While traveling through China, we saw this house in a postcard. When my parents, uncle, and aunt returned for the first time, there was a huge reunion with a feast and fireworks. When my sister, cousin, and I visited soon after, my father’s cousin’s family provided rooms on the third floor for us. While there are hot showers and toilets on the ground floor, there are chamber pots in each room. There is also a mosquito net above each bed.

Out of challenging farming conditions, there is an abundance of bananas, lychees, and persimmons in Yongding. Zhen Fu Lou is in a rural setting, with a small warren of white rabbits under the pear tree, a flock of chickens, a chubby pig, croaking frogs, a black and white duck, kittens, and a water buffalo down by the stream.

The Lin clan built Zhen Cheng Lou (nicknamed the “prince of the tulou”), using wealth obtained from the tobacco trade, at the heart of the Hongkeng tulou cluster in 1912. This elegant and stately residence has a double ring. The outer ring contains 4 stories and 184 rooms and the inner ring has 2 stories and 32 rooms. The occupants store firewood, turtles, and various supplies in the second floor. Solid stone fire walls protect the rooms of the outer ring. There is an ornate iron railing on the inside of the inner ring. At the central courtyard, the ancestral hall has an impressive stage with Western design influences, such as white columns. From time to time, the stage holds special events, concerts, and dramatic presentations.

My grandfather’s eldest sister married into the family. The Lins of Hongkeng village let us tour the home after we showed them an old black and white photo of my grandparents and my uncles and aunts. 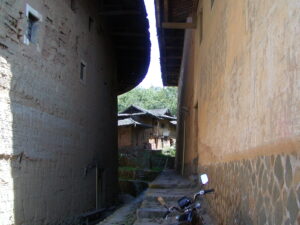 In the same cluster, there are two small buildings with an alley so narrow that the roofs seem to touch. The breeze and the shade make this a popular place to relax in the midday heat. The most comfortable spot in any tulou is right inside the main entrance with the door wide open.

The Jiang clan’s 57 families still live at Cheng Qi Lou (king of the tulou), built in 1709, at the Gaobei tulou cluster in Gaobei village. This massive tulou has four concentric circles, with a four-story outer ring and 288 rooms. The 80-room second ring has two floors and the third ring has 32 rooms with a library. The fourth ring has a round corridor that surrounds an ancestral hall used for ancestor worship, festivals, meetings, weddings, funerals, and other ceremonial functions.

This Liu clan dwelling may be the oldest existing tulou. The five floors hold 270 rooms, and each of the 25 kitchens has a private water supply. With one ring, the house looks like an amphitheater and each room resembles a fancy viewing suite. The highlight is the tilted pillars. Some of the wooden posts tilt 15 degrees, buckling in and out in different directions. Yet, this tulou has remained standing in Nanjing County since 1308.

Ji Qing Lou, built in 1419, is the oldest tulou of the Chuxi tulou cluster, which contains 36 tulous. The Xu clan lives in this rugged terrain. Ji Qing Lou has an outer ring with four stories and 212 rooms, and a one-story building in the middle of the inner ring. Round tulous represent the sky and square tolous represent the earth.

The Nanxi tulou cluster is located along the Nanxi (South Creek) Valley south of Hukeng. There are so many earthen houses along the river that the area has been named the Tulou GreatWall. Yan Xiang Lou is the largest of the cluster, and was built in 1842. This Su clan roundhouse is four stories tall with 136 rooms. The occupants of this home are distant relatives of our family from Zhen Fu Lou. During my visit, I remember seeing little chicks running around the central courtyard.

Huan Ji Lou (built in 1693) is over 300 years old. You reach the entrance by following a narrow alley up a hill. If you stand in the center of the courtyard, any sounds you make will echo and reverberate throughout the house.

Many people still live here. It feels strange walking around someone else’s home and watching them carry out their everyday routines. On the railings, vegetables are dried under the sunshine. Above the railings, clothes are hanging out to dry.

Locals call the Tian Luo Keng tulou cluster “four dishes and a soup.” The collection has it all, with three roundhouses, an oval tulou, and one square tulou in the center.

Note: You most likely will not be able to find this house. Tong Zhin Lou is an octagonal house that is really a rectangle that has been shaved at each corner. So, it is four long walls and four really short walls. This neighborhood has a high concentration of Jiang clan family members. My grandmother was born in Tong Zhin Lou. Looking around at the lush surroundings, I now understand where her incredibly green thumb came from.

At the homes we have visited where we still have family, we are presented with the utmost hospitality. We are offered rounds of tea served in tiny porcelain cups no bigger than your thumb. Our hosts treat us to the sweetest and juiciest lychees and pears. We leave with bundles of gifts, including peanuts and preserved vegetables. It is an incredible honor to finally meet our relatives from the village our predecessors are from. Sometimes I think about what it would have been like if our branch of the family never left. My entire family, all my aunts and uncles, and cousins, would be my neighbors in the same house. Over time, future generations will continue to leave Yongding in search of greater opportunities. That is the nature of the Hakka people. We have been seeking distant lands for over a millennium.

With China modernizing at dizzying rates, take a glimpse of what life was like in an ancient village of earthen houses.
Transportation: While buses and trains depart from Xiamen, hiring a driver offers greater flexibility for exploring Yongding.
Lodging: Spend a couple nights at a tulou in Yongding. Tulou owners are friendly and helpful. Bring a flashlight and mosquito repellent.
Food: Most tulous prepare Hakka dishes such as: mei cai kou rou (梅菜扣肉: steamed pork belly with preserved mustard greens) and niang doufu (酿豆腐: braised tofu stuffed with pork).